The events in Durbe webcam of white tailed eagles - Q&A

The nest of white tailed eagles in Durbe is experiencing events that we have not witnessed in this webcam ever since. On March 28 the male Raimis disappeared, but the female Milda, who remained in the nest, continued incubation of eggs and stayed without food for the almost a week. She also had to repel a pair of strange White-tailed eagles that showed interest about the nest. On April 4 after 8 days without food Milda left the nest for almost 6 hours to feed, but returned to eggs and continued incubation with another male eagle in sight. On April 5  a pair of eagles, presumably male, could be heard fighting under the nest.

These events have raised many questions amongst the viewers about the nest, Milda’s future and if there were any possibilities to help Milda. Latvian Fund for Nature has also received lot of suggestions and ideas on what could be done to help. Here we have compiled your questions and comments of the webcam project manager, ornithologist Jānis Ķuze.

The bird is most likely either dead or seriously injured. We can only guess what the real reason is, and there are many options. Given the events of recent days and the appearance of a new pair of eagles, an intra-species conflict is a plausible explanation. At the moment, there are no plans to go to the vicinity of the nest to try to find out something closer - it would be a needle search in the haystack - the bird can be anywhere within a radius of about five kilometers (and cannot be ruled out that further). It would not be advisable to walk through the nest area now, while Milda and the strange birds are actively residing the nest. With each passing day, the chances of finding also decrease due to scavengers.

Can we help Milda? Maybe it's possible to bring food to the nest?

Milda is a healthy and strong adult bird - she is now amazingly patient in protection and incubation of her eggs, but it is a matter of time – when the feeling of hunger will prevail, she will leave to search for a prey. It is not desirable to bring food to the nest, for example, with a drone - any interference, noise, unusual object would frighten both Milda and the other eagles, and thus create a risk of abandonment of the nest. In addition, it would not be possible to feed the incubating bird and then the juveniles by external intervention, only the birds themselves can do it. Milda could cope alone, if there was one half-grown nestling in the nest - it would be possible to feed it by one of the adults.

What will happen to Milda and the nest? Why doesn't the Latvian Fund for Nature want to help Milda?

Rescuing Milda in human terms is not applicable for wild birds. We do not plan to interfere with the events in Durbe nest as this may lead to a worse result than it is now. Although breeding is unlikely to be successful this year, the female has a chance to find a new partner by next year, or a couple who are currently interested can start nesting in this nest. Interfering with the drone in such a situation can lead to the nest being abandoned.

Although it could be difficult to observe, the events in the nest show how it happens in nature. For the past three seasons, young birds successfully fledged here, it was only a matter of time before nesting failed.

Is it possible to save Milda's eggs and hatch them in the incubator?

Removing eggs from the nest would be a serious disturbance for birds in the breeding area, so it is not desirable as it would have worse consequences than at present. Furthermore, even if the nestlings were to be incubated, humans would not be able to fully replace their parents and it is possible that they would not be able to live in the wild.

Who is stranger male?
The strange male is not ringed, therefore the origin of this bird is unknown.

Could they become partners/ Would stranger feed Milda or incubate the eggs?
Yes, theoretically they could become partners and we can’t exclude that strange male could start feeding her. It is as well up to the experience of the strange male – if this adult is young and inexperienced as a breeder, he might be “playing family” without real knowledge how to do that.

We understand that it can be emotionally difficult to watch the current events in the nest, but that is the aim of live cameras - broadcasting show the natural events in all their manifestations. Not every season breeding in the nests is successful and the reasons for failures are various, we are currently witnessing one of these situations. 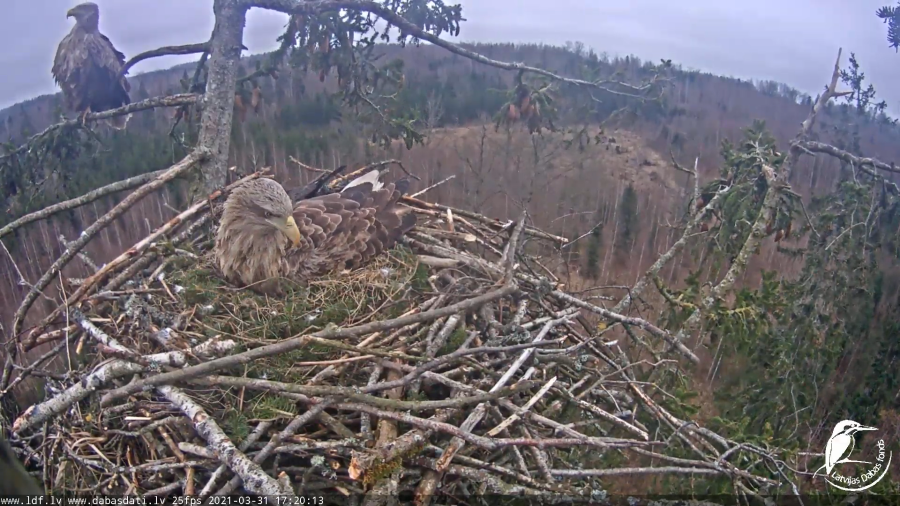