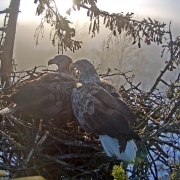 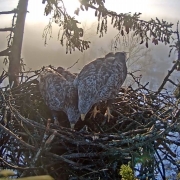 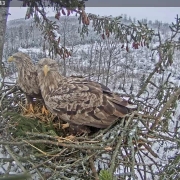 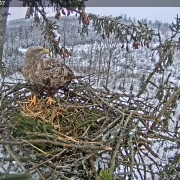 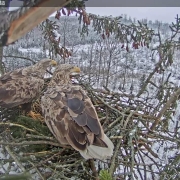 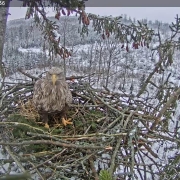 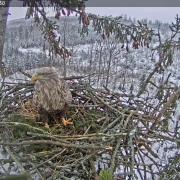 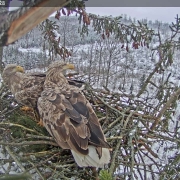 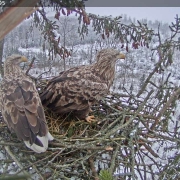 The nest of White - tailed Eagle 2015
The nest of White tailed eagle that is equipped with webcam system is located in W part of Latvia in Durbe County. It is a new breeding territory, known only since summer 2014 when first nest of this pair was found. It was built in the retention tree – pine tree that was left in the clear felled area. Pair bred successfully that year – it was one of the four known nests in Latvia in 2014 with three youngsters.
This year eagles started to build a new nest in the nearby spruce tree on the wind broken top. Several of the top-most branches are growing upwards now, thus providing a support for the eagles nest. Camera was installed at one of those branches at the early stage of nest building process, giving us a rare opportunity to watch the process of building of new nest (so far the webcams were placed mostly at White-tailed eagle nests with previous breeding history).
Soon we discovered that the female is ringed, on left leg it has a ring with code K404 and colour combination “blue over red”. On right leg it has a ring with colour combination “blue over white” that points to the Estonian origin. Colleagues from there informed us that this bird was ringed as a nestling in the nest in southern part of Saaremaa Island in June 1999. Origin of the male is unknown as this bird is not ringed.
This nest is interesting with its location in the spruce tree. It is only fourth historically known nest in Latvia that is built in spruce (roughly half of all nests are built in pine trees, one third – in aspen trees, one tenth – in birch trees; more seldom spruce, oak and black alder is chosen). “Spruce nests” are usually built on such broken tops and are located high above the ground (in this case roughly 25 meters) – the highest nest of White tailed eagle in Latvia is located 31,5 meters above the ground and is built in spruce as well.
In the first half of February we can see the intensive nest building process where both of the birds are involved. If breeding will be started, eggs (1-3) could be laid in the end of February or in the first weeks of March (in rare cases it happens as late as in early April). Incubation usually lasts for 38 days; the young birds are going in their first flight in the age of 2 and a half months.
Contacts