The Latvian Fund for Nature (LFN) starts a new tradition – next to the other symbols of the year named by professional organizations of biologists, the LFN decided to nominate another symbol of this year – Habitat of the Year. Biologically valuable grasslands have been named for the Habitat of the Year 2015.

Concept “biologically valuable grasslands” arose more than 10 years ago with the aim to name grasslands with particular importance for the conservation of nature biodiversity. Biologically valuable grasslands are grasslands where composition of species formed mainly in the course of natural processes and where during the extended period of the time the same maintenance methods were applied – grasslands were cut or grazed. Natural meadows and pastures are known by the rich number of plant species and especially by the specific species called indicator species. Their presence directly indicate that the grasslands are natural and that the maintenance methods in the long run have been nature friendly. 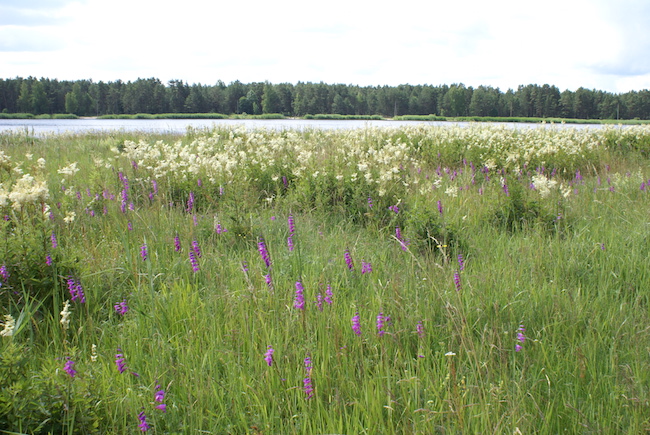 In the 30ies of 20th century natural grasslands occupied approximately 30 percent of the territory of Latvia. Presently it is less than one percentage left. Main reduction has been due to wide land reclamation, ploughing of natural grasslands or their overgrowing with forest or simply no maintenance. That means that grasslands can exists only if they are maintained – grasslands are directly depending on human activities.

Importance of biologically valuable or natural grasslands is very high: almost half of protected plant species and also main part of medical plants is found exactly in these grasslands. Natural grasslands are very important also for birds and many other living creatures, also for the conservation of typical cultural landscape. In fact all natural grasslands that are recognized as biologically valuable, correspond to one of Latvia or European Union highly protected habitat types and for the protection and maintenance of such habitats special attention should be paid.

With this the Latvian Fund for Nature invites owners of agricultural lands who maintain such grasslands to appreciate their role both in the conservation of nature biodiversity and ensuring ecosystem services in the agriculture and to maintain them responsibly.