Restoration of Norina river in Northern part of Latvia

This autumn a part of river Norina was restored – from the former mill to the mouth of the river Salaca. Restoration of the river ended on October 15 with a joint work. Cleanup was attended by representatives of the Latvian Fund for Nature, the Nature Protection Board as well as other nature lovers. During the cleanup the former mill dam was demolished, thus allowing salmonids to migrate up the river to their spawning grounds. This was a historic moment as the fish had not been able to go upstream due to the dam for around 100 years.

River Norina is about 11 kilometers long left bank tributary of the river Salaca. The river is located in Salaca Valley Nature Park. The restoration of salmonid migration path in river Norina is particularly important because Salaca river basin is the fourth most productive salmonid river in the whole Baltic Sea. It is predicted that river Norina will be used as a spawning ground by sea trout mostly.

Restoration works were carried out by means of EKOenergy Environment Fund and organized by the Latvian Fund for Nature.

EKOenergy is a network of  European environmental organisations that supports the growth of renewable energy in Europe and the protection of the climate and environment. The most visible tool of the network is EKOenergy, the European ecolabel for green electricity. It is the only European ecolabel for 100% green electricity. Electricity can only be sold as EKOenergy if the product fulfills the criteria, which are defined by the network. It includes the following aspects:

For every EKOenergy purchase, money goes into the Climate Fund. In the case of EKOenergy from hydropower, money also goes into the Environmental Fund that supportet acitivties in Norina river as well. 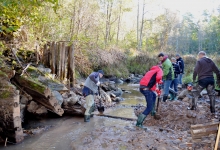 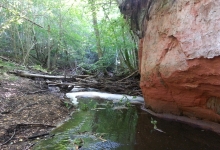 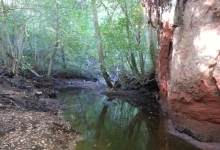 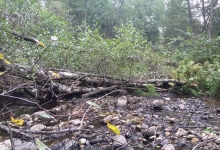 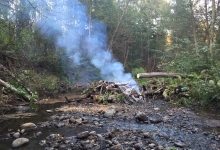 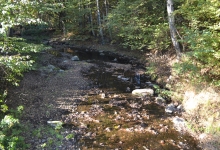